The show ‘Solitude of Ravens’ at Michael Hoppen Gallery, London (until 23 April 2016), has a bleak mid-winter feel. A profound sadness pervades Fukase’s images which were made over a ten year period following the photographer’s divorce. The images speak not just of solitude or being alone but of a deeper loneliness that may have become – or been caused by – a long-lasting period of depression.

I can imagine the photo series starting as a means of working through a traumatic period but inadvertently becoming a brake on emotional recovery; as if the photographer is mired in a self-perpetuating cycle of depression rather than finding an upward recovery towards a happier springtime.
The motif of the unfairly maligned raven recurs through the series as a bird of ill omen. The birds are frequently depicted in silhouette like shadow puppets subject entirely to the external control of the puppeteer, alluding to the lack of control the photographer may feel over his own life.
Sharpness and definition are rare commodities in these images, which are more about mood than content, about emotion rather than fact. There is a muted tonal pallet: black shapes and grey textures dominate even in the non-Raven images.

Limited tonal range, blur and grain typify the images in ‘Solitude of Ravens’

The photographs are not sequenced but several are placed close to each other to emphasise their similarity. Fukase originally made the series in 1982 but the images here are a re-working by a friend of his, with some additional ones. Most of the photos are printed beyond the image frame giving a rough-edged look with a hint of 35mm film perforations, reminiscent of a frame from a movie or a keyword chosen from a sentence: a staccato summary of a bleak period in life. 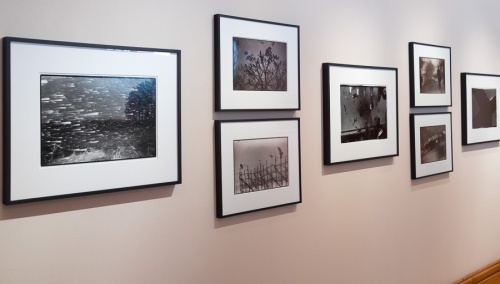 Masahisa Fukase died in 2012 after being in a coma for 20 years following an accident. One is left with the distinct impression that his was not a rich and happy life. But the show is a masterful demonstration of how photography can be used to evoke emotional intensity and as such is well worth seeing.

On show for a brief period at Magda Danysz Gallery, London, was the sculpture and photos of the French photographer Charles Petillon. Petillon is a commercial photographer but the exhibition showed his personal work. Inflated white balloons of various sizes are placed or squeezed into various locations, often with associated lighting. They are fascinating interventions in space that play with scale in a fun way; an approach that has lots of potential for the future.

Part of the Charles Petillon exhibition. You can just see some white balloons through the doorway on the left

The sculptures can be like clouds or foam or bubbles, or like droplets of liquid before they coalesce. The installations are transient but preserved as photos, which become the artwork. Or another artwork really. Although not a new concept (c.f. the works of Richard Long or Andy Goldsworthy), the photograph becomes the work rather than simply a record of an ephemeral installation.

Petillon uses the landscape, the built environment and interiors as spaces for his sculptures

Petillon plans to continue with his balloon sculptures internationally over the coming years, so keep your eye out for some fun!