I came across this show in the Canadian High Commission by accident. I was walking through the north west corner of London’s Trafalgar Square, noticed that the Canada House Gallery had just opened and they’d chosen Canadian photographer Jeff Wall as the inaugural artist. The gallery is open, via a security check, Mondays to Saturdays 11.00 – 17.45 until 15th May 2015. 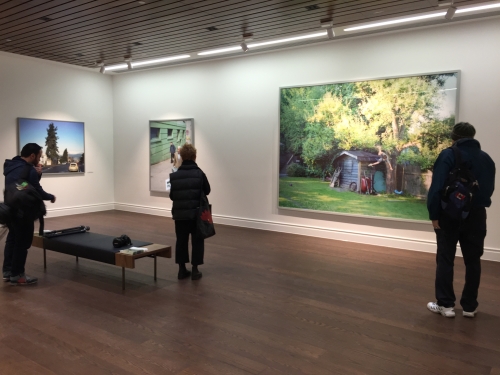 It’s a one-room gallery and Jeff Wall’s works are decidedly in the over-sized category so you don’t get many to the metre – only five works in this case, plus some blurb. The photos seem too large for such a compact space though that’s the way Wall likes us to experience his images: to become almost part of the scene. Personally, and I would have preferred to see more, smaller works in what is quite a small space, but hey, it’s good to see another gallery opening for the visual arts and displaying photographs.

The images are an eclectic mix with no obvious theme or relationship other than a grab-shot quality to them and yet apparently they are very deliberate and considered. As Sara Knelman says in her leaflet accompanying the exhibition: ‘Wall works somewhere between the possibilities of capturing and constructing the world around us.’

If you are in central London it’s worth popping in to see the photos – and support the Canadians in their effort to open a new gallery space!