Although Michael Wolf is German he lives on Hong Kong, and he uses the city very effectively as inspiration for his photography. His project Architecture of Density shows frontal pictures of Hong Kong’s high-rise apartment buildings without sky or horizon and more-or-less straight on.  This leads to a lack of perspective giving a flattened, semi-abstract quality.

A few images from this extensive project are on show at Flowers Gallery, Cork Street, London until 22 February 2014 and are well worth seeing as huge, wall-sized enlargements rather than in Michael’s book.  So often we see large images which don’t benefit from being large (except that they command higher prices) but in this case Architecture of Density really does gain artistic as well as physical impact. I recommend seeing them in their 2-metre-long-edge form if you get the chance.

At first glance they could be computer-generated repetitions but the human presence revealed in the detail shows they are not. The semi-abstract quality detaches the viewer from the reality of living in these massive blocks, each of which must contain several thousand people even though we don’t see them in person. 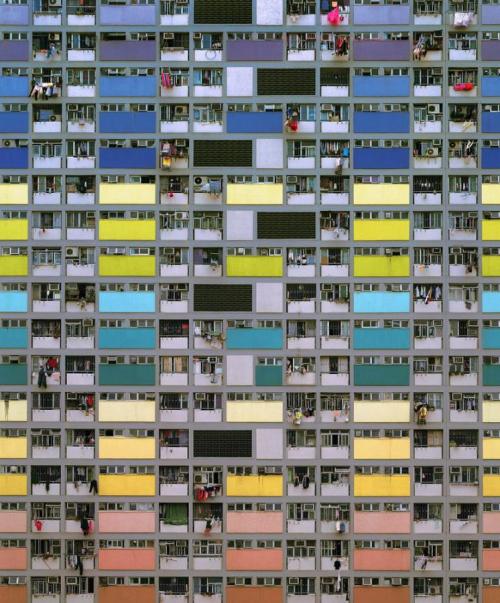 It would be easy to conclude that these prison-like buildings not only de-personalise but also de-humanise the occupants but looking deeper we see order not chaos, tiny marks of humanity not criminality, faded peeling paint but not mindless graffiti. Perhaps it’s not such a bad place to live after-all.

Also on sale at the gallery was Michael’s book Hong Kong Trilogy. This is my kind of book: quirky, beautifully seen images of the small and unregarded cameos that make the character of a place. Again, without picturing people but their presence is everywhere. So far this is my top book of 2014 and it’s going to be hard to beat!

Even cones deserve their 15 Minutes of Fame! © Malcolm Raggett