Some photographs make me want to keep looking at them or return to them again and again. Why is this? It’s not just subject or composition, but a generic set of cues and clues that seem to apply to many of my favourite images.  I thought I’d share my ideas about some of these: Abstract Reality; Message; Symbol; Metaphor.

All photographs are abstractions to some extent: we frame a slice of time and present it as a 2-dimensional image, often in black & white, so we’ve removed time, depth, information from outside the frame and often colour from our representation of reality.  Doing this means that the photograph is bound to be an abstraction of reality.  Even apparently “straight” photographs have a degree of abstraction about them but our brains are trained through life in an image-based society to interpret them as literal.  If you doubt this, bear in mind that previously-isolated hill tribes without a culture of image making do not recognise a photograph taken of a person or object then shown to them immediately as an image of that person or object. 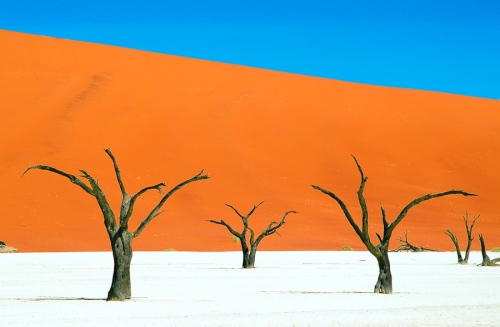 This image was taken at about twice normal focal length (100mm on 35mm format) to compress distance and give a more 2-dimensional appearance.  The effect I wanted was that the sand dune and sky appeared as if it were a backdrop in a stage set and the trees were the performers.
Deadvlei, Namibia. Copyright Malcolm Raggett 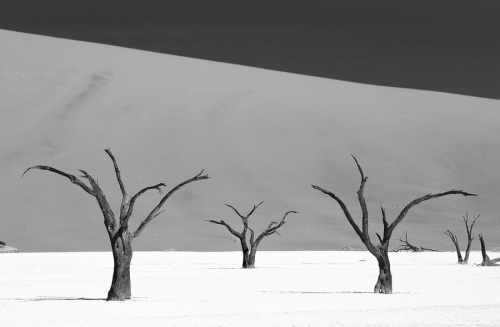 And this is the same image as above with the colour removed, giving a very different feel.  It has lost the backdrop effect I wanted but has a more graphic, drawn quality, which in this case I didn’t want.
Deadvlei, Namibia. Copyright Malcolm Raggett

As a visual code we allow moving objects to blur and we concentrate the viewer’s attention by manipulating what is in and out of focus.  We also imply the third dimension of depth by changing the focal length of the lens and the depth of field.

Beyond this, we can also manipulate the lighting.  Done subtly we may not notice that a mood has been enhanced or a detail highlighted.  We might also detect that something is different – not quite real-world without realising why.  Artificial light or computer manipulation might be used to give a controlled look to the image. 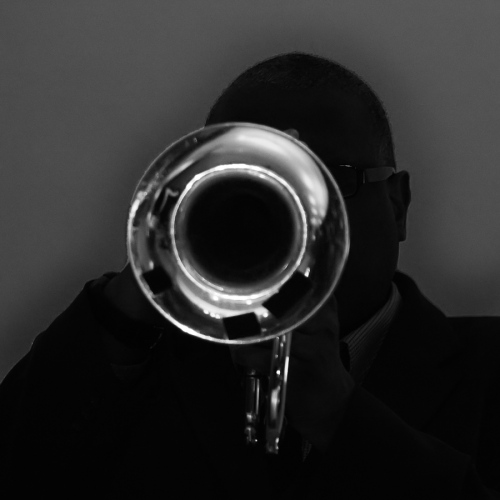 A telephoto lens to compress distance, use of monochrome, selective focus to blur the instrument and flash to add light and reflections were all used in this image for their abstract qualities.  The focus is on the musician’s ear, putting the horn out of focus but it remains the first thing that draws the eye due to the highlight reflections.  The shadow around the musician was added in the computer to make it look like an aura surrounding him.
Flugelhorn, London. Copyright Malcolm Raggett 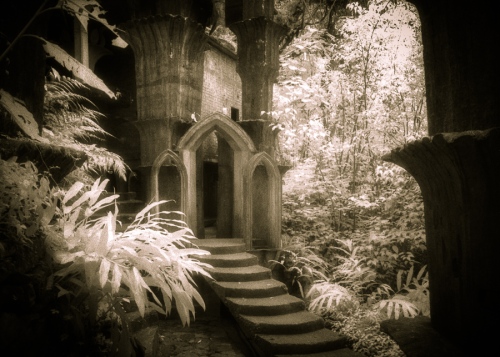 A moderately wide lens and a small aperture were used to keep detail in focus but infrared film and filter give an other-worldly effect. The picture was taken in a garden (Las Posas, Mexico) whose creator was fascinated by surrealism. The monochrome infrared was used to enhance this dream/nightmare quality.
Copyright Malcolm Raggett

Laura Noble has excellent taste in art-photography and I try to attend any show she is involved with.  She now runs a virtual gallery at http://www.lauraannnoble.com/ rather than a permanent physical space, but she has just taken over a display area at London Metropolitan University’s Cass Faculty of Art, Architecture and Design to show a set of images by Lottie Davies. It’s right outside Aldgate East tube station in London, UK, so quite easy to get to if you are near London.  Read about the exhibition opening here.

Like many creative photographers, Lottie splits her time between paid commissions and her art projects. The show that runs from 5 April to 4 May 2013 is her “Memories and Nightmares” series.  There’s a video interview with Lottie on YouTube that gives some interesting background. 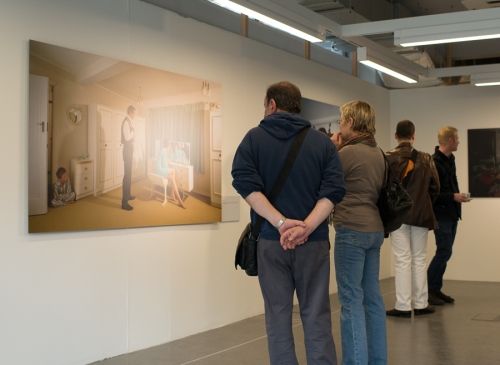 Lottie Davies’ Memories and Nightmares exhibition at the L. A. Noble Gallery, 5 April to 4 May 2013.

Although each image can be viewed independently of its caption, each caption describes a dream, nightmare or memory that Lottie has interpreted photographically.  A few of the images were quite straight-forward and didn’t demand much from the viewer.  Others were much richer and complex, requiring some time, observation and imagination to interpret.

With some I read the caption first then looked at the photo, with others I did the reverse.  I found the most rewarding experience was to look at the photo and place my own interpretation(s) on it, then read the caption then look back at the photo to see if the meaning had changed.  In some cases the caption simply provided back-story but in others it provided more explicit guidance to the viewer.  This exhibition provides an interesting study in the relationship between an image and its caption.

As images of dreams and nightmares they qualify for the label of Surrealist, though something more is required: a air of unreality or super-reality is also needed to earn this badge and many of Lottie’s images to have this quality.  They are tableaux but with an other-worldly quality.  I was particularly drawn to the Red Devil, http://lottiedavies.com/#/Art/Memories%20and%20Nightmares/9/.  Its detail and ambiguity allowed many readings around the theme of belief, superstition, religion and cognitive dissonance. I gather there was even a bible hidden out of sight of the camera – perhaps as a talisman for the photographer!  There are references to nursery rhymes: “…here comes a candle to light you to bed, and here comes a chopper to chop off your head!” in The Girl and the Tower http://lottiedavies.com/#/Art/Memories%20and%20Nightmares/11/, and I really like a good metaphor such as: all is not idyllic in the bucolic English countryside – The River http://lottiedavies.com/#/Art/Memories%20and%20Nightmares/4/

This is a fascinating show but plan to spend some time reading the images to get the most from them – a passing glance does not do them justice.  Well done Lottie, and thanks to Laura for bringing them to a gallery space.

Landmark: the Fields of Photography exhibition

“Landmark: the Fields of Photography” is a free exhibition of landscape photography showing at Somerset House, London, UK, until 28 April 2013. There is no publication and only a few of the images are available on-line, so a visit is essential: this is a must-see exhibition for anyone interested in the genre. 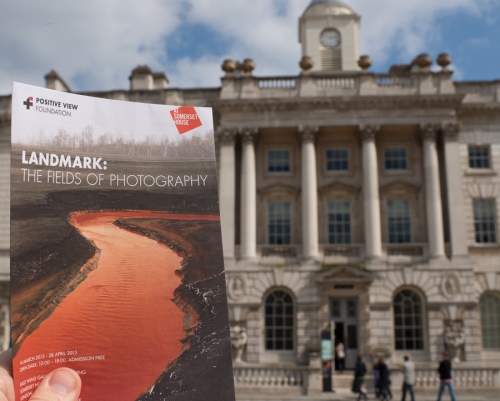 Landmark: the Fields of Photography, in London until 28 April 2013. Unfortunately and ironically for a photographic exhibition, photography in the gallery was banned so I can’t show you any samples of the layout.

The Positive View Foundation has done some fine charitable work in the past encouraging photography as a means of expression with disadvantaged young people.  This exhibition continues their reputation for excellence and I’m sure will raise money to help continue the good work.

80 photographers have contributed work to the show, which is curated by the very experienced William A. Ewing.  He has categorised the images into 10 groups:

Although as I went round the exhibition I found myself questioning these categories and whether some images were placed correctly, this really is a counter-productive process.  In the end I enjoyed the progression of images that this layout gives, starting with more traditional, “straight” landscapes and ending on heavily computer-manipulated ones.  One or two even fell outside my definition of photography, being entirely computer-generated. But again, I don’t want to get hung up on definitions and semantics.

I cannot remember a better multi-artist exhibition on contemporary landscape photography.  Some of the photographers are well-known to me while others are a happy surprise.  It’s a shame that there is no accompanying publication to act as a record and also a shame that photography is banned (always ironic in an exhibition of photographs). Ah well, can’t have everything I suppose.  The curator, organisers and sponsors are to be complimented on achieving this excellent show.  You’d be mad to miss it!