I usually use the highest quality optics I can afford and strive for sharpness in my photographs, but once a year (at least) I replace my lenses with a pinhole and go out and celebrate Worldwide Pinhole Photography Day. In the past I’ve used a film camera but this year I used a digital camera with a Skink pinhole.

I had a few locations I wanted to explore fairly close to home. This was just as well because I quickly discovered that the standard shiny stainless steel finish on the inside of the Skink adaptor was giving a bright spot in the central area of the image, so I made a quick trip home to spray it matt black!

I didn’t have a theme in mind when I started out but what emerged was “intimations of water”, since all the pictures were taken close to ponds, streams, rivers or canals.

There are more examples on my Web site. It is interesting that the quality of the photos this year on the small digital format is noticably softer than my previous effort on roll film or 5×4 inch film, and the overcast conditions gave a moodier atmosphere.

It has also encouraged me to experiment a bit more with lens-based photography, so this weekend I set the camera on manual focus took out-of-focus picture to give a more impressionistic effect – it was great fun! Some examples: 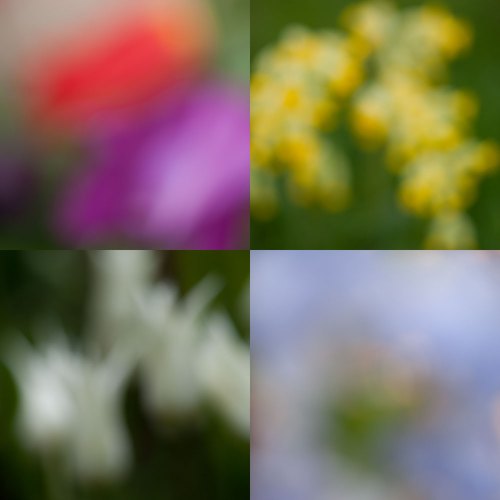 I made a point of seeing the Portraits exhibition by Irving Penn at the National Portrait Gallery, London, recently. I was underwhelmed, which was a surprise, and I’m curious about why this should be.

I have always admired Irving Penn’s photography. I have a copy of Passage on my bookshelf that dates from 1991; it’s a selection made by Penn of images from his career. Fascinating and admirable stuff but, like an autobiography, not an independent view. He also did photography a great service by rediscovering and promoting the platinum/palladium printing process. I remember seeing original pt/pd prints of his Cigarette series from the early 1970s. The quality was superb: he has the ability to elevate a trite, ignored subject into art; he sees and photographs things sufficiently differently that his images are eye-catching and with such quality that you want to look for longer.

It was with these preconceptions that I anticipated with some excitement the Portraits exhibition. Many of the portraits that helped make Irvin Penn’s name were present together with many less well know ones. They were arranged chronologically by decade, implying, with some justification, that Penn’s development showed significant evolution in tune with the decimal system. We are now used to these images and the styles are clearly of their time. At the time they would have been progressive and edgy, and many of them are regarded as classic portraits. But I kept wondering how much of what I was seeing was the photographer and how much the sitter. How much insight are we getting into the person being photographed? On the wall of the exhibition was written a quote from Penn: “…the inside is recordable only in so far as it is apparent on the outside.” Well, duh, yeh. If that level of insight is transferred to the portraits I really have to think that what we are seeing in Penn’s images is style rather than substance. Why should I be surprised at this? After all, he did earn his living from the fashion industry. I was underwhelmed because it didn’t meet my expectations, but that’s my fault not Penn’s; in the end, the exhibition has added another facet to my appreciation of his photography.

For what it’s worth, here are the notes I made as I went round the exhibition:

to 1948
Uniform even light. Full length poses. A distance between viewer and subject. Posing corner and posing carpet used frequently to get sitter’s reaction to an artificial situation. Little evidence of sitter’s environment.

1950-1960s
Starting to chop off tops of heads – getting too close? Eyes/nose/mouth poses. Hands too. Directional lighting with shadows.